Women in IT – Progress? What progress?

With a spotlight well and truly on female participation in the workforce, particularly in industries like IT where they have been under-represented, you’d be forgiven for thinking that things might be significantly better compare to say, 20 or even 10 years ago. But it might come as a surprise to find that according to data from the ABS, female participation as a percentage of the total IT workforce, until very recently, has actually been in decline.

Female participation, as a percentage of the IT workforce, actually peaked in Australia in the mid 90s prior to the take-off of mass-market Internet access. The subsequent boom and growth of the Internet saw thousands of people join the industry but they were mostly men. For the following two decades, the proportion of women working in IT shrunk. By 2018, there was just one woman for every four men working within the industry. And as many will testify, when you drill down into particular fields and disciplines, the ratios get even worse. 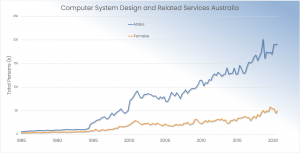 At Open Door, we have sourced for roles where the ratio of male to female applicants has been in excess of 30:1. How can any company realistically move towards gender balance in the medium-term when there is such a structural imbalance as this?

Well thankfully it’s not all doom and gloom, and here’s why. Despite many people’s experience in recruiting, there are actually more women out there in technical roles than the job application inbox would have you believe. You just have to know where and how to look. There are noticeable differences in the way men and women approach the job market, in general terms at least. When you combine these differences with economic shocks like COVID-19, the differences can be exacerbated. So, at Open Door we directly address those differences so that we appeal to a larger number of women relative to the norm for any particular role. Sure, it isn’t easy (if it were, everyone would be doing it and lack of diversity wouldn’t be an issue), but with the right approach, patience and attention to detail, it’s possible to shift the dial. 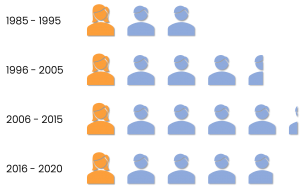 The data is also starting to suggest that the tide is turning when it comes to women’s participation in IT. Since 2018 there is a small but noticeable upturn in the number of women working in the sector. There could be a number of reasons for this including an increase in the number of women graduating from STEM-related degrees and other related education. Businesses too, are beginning to understand the value of having more balance within their teams.

We have experienced an increase in the number of organisations who are willing to invest in achieving balance. Whether that is through a balanced recruitment strategy, developing women-friendly policies or workplaces, or a focus on removing the gender pay gap, there is a shift happening albeit more slowly than we would like.

Overall though, it’s positive news – and with continued governmental focus and genuine fiscal support including new budgetary initiatives these numbers should continue to increase over time. And when that happens, everyone wins.

Talk to us about how we can help bring forward the change in your organisation, and introduce more women to your role shortlists.

Talk to us about how we can support your diversity agenda: Executive search, leadership development and specialised recruitment.

There was an error with your form submission, you have not been subscribed to the list.

We'll be in touch soon.